Twitter has changed my life, and for more reasons than I have both time and inclination to elaborate. I learn from it constantly. It is an endless source of knowledge, exposure to the obscure, humour and/or wit, poor grammar and punctuation, tenderness, entertainment, and amusement. I find myself oscillating constantly between being fascinated, touched and bewildered by how much cleverness there is in this world. And how old I really am.

For the marvel that is Twitter, there is also its dark, dank, unwashed underside. Last week I came face-to-armpit with this side, and let me tell you right now, it’s an unhappy space, much in need of therapy, love and good old-fashioned police intervention. For those aware of the incident I am referring to, it’s certainly something a lot of us are not going to forget in a hurry. For those yet unacquainted, sorry but I’m not getting into sordid details of the actual occurrence. Partly because it’s now too cumbersome to comb through all over again, and partly because the incident itself is not as important as the experience and understanding it offered. That’s what this post is about.

In a (rather unwieldy) nutshell, I found myself embroiled in a sinister dance of mind games and stalkerish activity on my favourite social network. As the night progressed, harmless guessing games of ‘Who am I’, turned into something far more macabre. Clearly, it was someone who knew me, if only from a distance, and I didn’t get the sense of great harm looming large. But when you are on your own, reading tweets by the lone light of the mobile screen, this is such an unpleasant circumstance. The next morning, my mysterious haranguer had disappeared, as had all evidence of his drunken marauding.

The following night he was back. By this time I had figured out who he was and was waiting to see what he’d come up with next. When he began flinging his provocative taunts and filth my way, I wasn’t quite the man I thought I could be.

While he seethed and stewed and spewed his trashy threats, I alternated from moments when my blood ran cold, to vitriolic fits where my fingers flew across the keypad, composing hateful hates in 140 characters. Somehow, ‘jst u wait m.fckng troll. i kno who ur. Imma send goons.’ doesn’t exactly make you quake in your boots.

I was in over my head. I needed rescuing. I needed a hero. 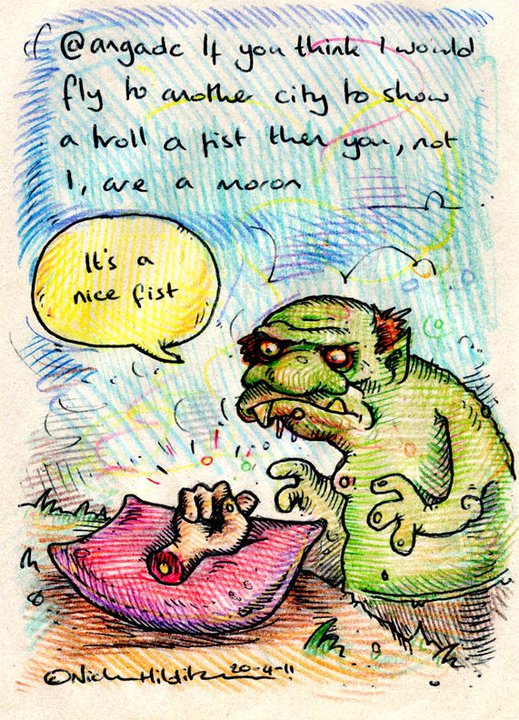 And I found one.

Do you remember me telling you about a man who told me a bedtime story with tweets? It seems that when he’s not busy weaving fantastic tales that make him an overnight internet sensation, he’s defending the honour of women. As he says (I imagine with a bit of a shrug), “I’m old school.”

What followed was surreal. It might have well been something right out of a Bollywood crime thriller. The troll, as he came to be known, turned nastier by the moment. Nasty isn’t even the word. He measured his words carefully. He tweeted only 21 tweets to the many hundreds that went out, challenging him to a duel. That’s right, a duel. Old school remember? And before we knew it, the date, place, and time were set. We live in exciting times.

It was only later, lying in bed unable to sleep that it sunk in. This was going to happen. A man living hundreds of miles away was going to fight for me. For ME. For my sake. I’ll tell you now, this is more than any man has ever done for me. It is one of the many reasons I do not feel close to men. I have never felt protected by a man. And no man has made me feel like I was worth defending for my own sake. Not because he had vested interests, not because he wanted to sleep with me, not because he was compelled to by obligation. But because it was the right thing to do. The only thing to do.

He didn’t think twice. He didn’t deliberate or weigh pros and cons. He didn’t consult with his friends or family. He simply followed his instincts. He did what he did because that’s who he is. Yes, it made him a hero. In my eyes; in the eyes of hundreds of others. Once again, he and his story (for it was no longer about me, really) became all the rage. He was the brother everyone wished they had. The friend, they all yearned for. The lover, that they thought existed only in drugstore paperbacks. The hero that no longer existed. The god we could talk to, touch and nearly taste. The god of our own making, in our midst.

I woke up the next morning feeling a little safer in the world. I woke with such a sense of love bursting inside my chest for humanity. God is not dead. I saw a reflection of Him in a human being yesterday. I saw compassion, courage, integrity. Words we use with empty flourish, now had meaning and were creamy with sincerity. Mankind had hope. We had hope.

Then I logged on and read the stream of posts. Speculations fired the timelines. Accusations of engineering the whole incident. Evidence, they all said. Where is it? Proof. We want to see pictures. You could tweet the entire encounter but couldn’t take ONE picture. Come on, dude. How do you expect us to believe it happened? They were calling him a fraud. They said he was a liar. An attention whore. This was a publicity stunt. That’s what it was – a hoax. A shenanigan to accrue followers.

But only 24 hours ago… They had made him a hero. An example to follow, they’d said. Learn from him. Take a leaf. They’d looked at him as though he were a god. “They’re crucifying me!”, he wrote, “they’re saying I made it all up. It’s madness!”

Crucifying. What an astounding choice of word. To say coincidence here would be something of a joke.

I was numb with anger and weeping with rage. How could you all do this? I was disgusted beyond words. I chose silence and decided to keep my peace (and sanity) by staying away from Twitter for a little while. As for him, he goes on. He sees how fickle we are and trusts a little less. Talks a lot but says little. Stays visible, but disappears inside himself where it must be only marginally safer and more familiar than the cruelty of the outside.

Humankind, you are consistent only in your ability to disappoint. I wrote that before realising in a moment of perfect stillness that there is no surprise here. For it is in our nature to desire, then destroy, and then covet again that which we love most. I know he knows this and hope he takes solace in it. And in the fact that, for one broken little girl, he redefined what a man can be. Gentlemanly. Fearless. Honourable.

Angad, you are a hero. My hero.